Posted at 14:50h in History by Splingaerd Admin 2 Comments
4 Likes

As promised, I am writing to you to share some photos, documents and a brief diary style report on the tremendously successful Splingaerd reunion in Ottenburg, Belgium which took place a little over a week ago. 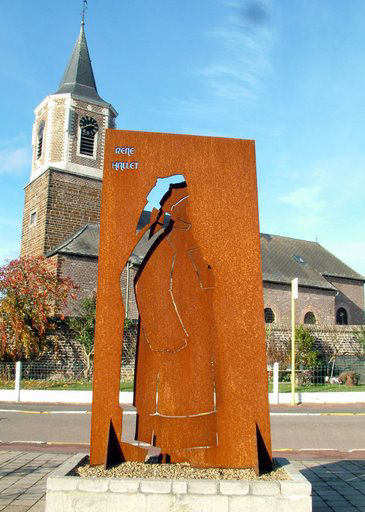 There were descendants of Paul who attended representing several global outposts of the extended family. My journey began in London, and I set out by 4am as I had opted to drive and cross the channel by way of the Eurotunnel – a half hour train journey from Dover to Calais underneath the seabed of the English Channel. I was relying on my trusty Volkswagen Station wagon (previously owned by Adrian Keet) to take me to all the way to Wavre, where our hotel is situated, just a little beyond Brussels.

I checked into the Hotel Leonardo with enough time to take a nap for a couple of hours. Anne Megowan, also staying at the hotel with husband Mike, woke me when it was time to go to the statue of Paul Splingaerd in Ottenburg – the main gathering and beginning of the whole event. When we got there many had already assembled. It was like a wedding reception only slightly dressed down.

There were over 20 people whom I did not recognise at all! You can get an idea of the atmosphere from the photos. Fortunately the weather was splendid and we were honoured by the presence of several prominent local figures including the Mayor of Huldenberg (http://www.huldenberg.be/32_nl.html), Dominique Vanpee (masterful master of ceremonies and former/honorary President of the Historical Society), Chris Morias (Current president and our gracious co-host at the historical Society), and René Hallet himself (creator of the statue in the centre of Ottenburg of our very own “Mandarijn Paul Splingaerd”). 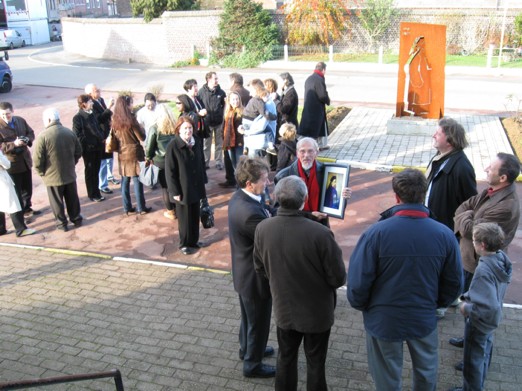 Paul’s statue is pre-eminently situated in the forecourt of a grand old public building which has in the past been a Bourgeois Mansion, a convent and a convent school. Directly across the road is the old St. Nicholas Church (http://upload.wikimedia.org/wikipedia/commons/a/ac/Ottenburg_church_A.jpg ) and this venerable location also helped to add to the sense of the occasion.

After many introductions and excited photo taking, we all got in our cars and drove in a convoy to Paul’s old home, where he was raised by his foster family. With such a large gathering descending on the quiet country manor, the residents must have wondered what on earth was going on. The Mayor went to the door as a courtesy and explained to one of the current residents what we were all about. I was told that this was an old house and though fairly extensive works had been carried out over the years, the house was structurally continuous from when Paul spent his time there, and still retained many period features such as the window frames and brickwork. 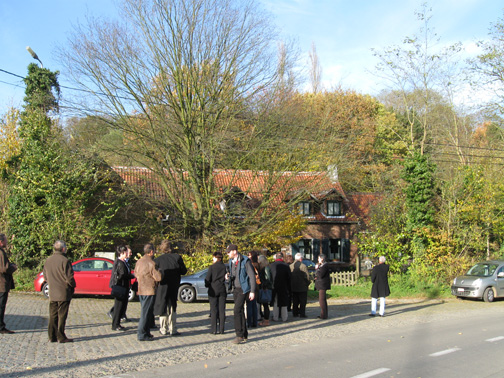 After we had taken in the view and surrounds of this lovely old double storey house, we made a short but treacherous trek cross country to the Historical society in Huldenberg proper (http://www.huisterdijle.be/index.html). The historical society covers the interests of the greater Huldenberg municipality which includes five villages including Ottenburg – the town where Paul Splingaerd’s statue stands. As a matter of geographical interest, this municipality is one of 30 in the Arrondissement of Leuven, which in turn is the larger of two partitions of Flemish Brabant (http://en.wikipedia.org/wiki/Flemish_Brabant), a province in the Belgian region of Flanders. 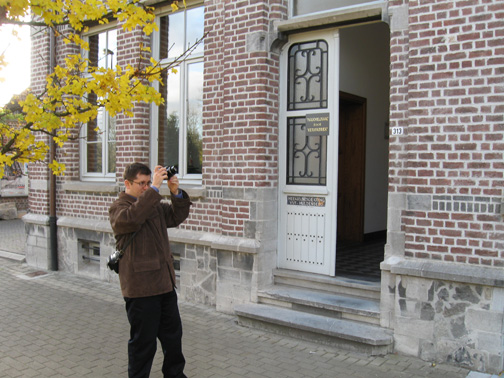 The historical society building was a beautiful and fitting setting for the presentations that were to take place. Dominique Vanpee warmly welcomed us with a polished and multi-lingual introduction. Then it was Christian ‘Super Glue’ Goens with a visually and empirically stunning history lesson which held even the non-French speaking members of the audience spellbound! I can say that Christian traced Paul’s history and movements through China and Mongolia along with a discussion of the fascinating personalities and places he came into contact with. Uncle Jean-Pierre arrived presently with his son Ramy, relieving much speculation and suspense as to whether they would make it over from London and indeed find their way across from Brussels airport. There was also an excellent analysis by Christian of the various branches of the family tree – the front page of which we can see in the Documents section of my photos. 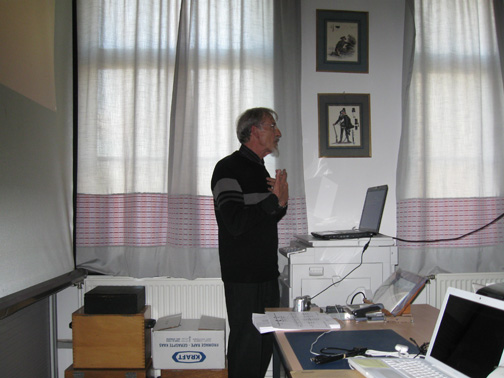 At the conclusion of Christians talk we were ushered into another room where delicious coffee and regional sweet cheese pie was served. We eagerly enjoyed the refreshments and the chance to sit down and catch up with each other.

Next was Anne Megowan’s marvelously evocative presentation, which guided us through many of the treasures of her research – evidence of Paul’s life story in the form of documents, maps, archival photographs of people, buildings and various artefacts. This collection was woven together with an insightful historical context and poignant stories of Paul’s public and private life. Thanks must go too to Anne’s husband Mike, who coolly drove the slideshow and held it all together technically while Anne presented. Towards the end of the presentation Anne also set the scene for next year’s 100th Anniversary of the first iron bridge across the Yellow river at Lanzhou. Could this yet become the next family reunion? 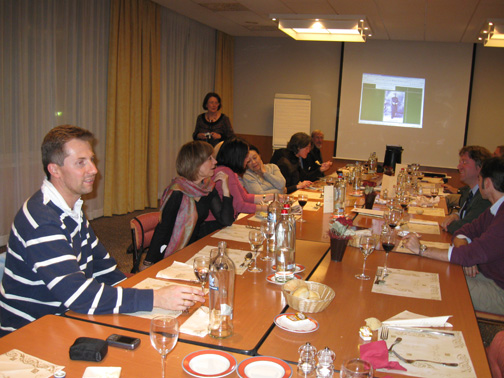 After the presentations we had a chance to mingle and socialise, take more photos and check out the various displays in the centre. Dominique and Chris, our hosts, had yet another treat for us in store in the form of a great collection of precious publications from over the years relating to Paul and his historical setting. See the Documents photo album for an idea of what we had the opportunity to browse through. Night had long since fallen by the time we left the Historical society, and so by mobile phone display light, we edged our way back along the steep path to our cars.

Dinner back at the Hotel Leonardo was a splendid experience. Anne proposed a heartfelt toast to the Splingaerds near and far. The food was very good and we all sat down at one huge long table which greatly aided open and colourful discussion. There was much moving around and getting to know each other between courses, and Christian gave us one last presentation – the inside scoop on his fantastic website (http://www.goens-pourbaix.be ). Those of us who hadn’t done so already signed the portrait of Paul, my copy of Anne’s Book ‘The Belgian Mandarin’ (https://www.splingaerd.net/) and logged their details in Anne’s event book. Conversation, enquiry and farewells went on till late. Fortunately for many of us we didn’t have far to go to bed!

Here are photos of many of the Attendees