The last time Paul Splingaerd saw his native Brussels was in 1906.  He had left as a young man of 23, and did not return till he was 63, on a mission to recruit Belgian technicians for the development of textile and mining industries in the far western Chinese province of Gansu.  In 2017 he is making a return trip to Belgium thanks to the sponsorship of the Tianjin Museum of Modern History and the Université Libre de Bruxelles (ULB).

As one of the many descendants of Paul, I am delighted to witness this ‘homecoming’ of the man who left Belgium as a lay assistant to Scheut missionaries, spent an adventure-filled four decades in China, and returned in 1906 with his son Jean-Baptiste as a distinguished mandarin in the Qing government.  Paul’s mandarin status gave him access to prominent government officials like Li Hongzhang with whom he negotiated on behalf of Belgian agents. In recognition of his efforts Paul was recognized by his king, Leopold II with knighthood as a Chevalier de l’Ordre de la Couronne.

author of The Belgian Mandarin Paul Splingaerd (2008), and Assembling the Paul Puzzle (2016) 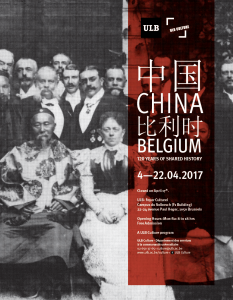